Buddy’s Blog – Convalescing in the Cotswolds

Convalescing in the Cotswolds

I have to say that 2018 didn’t get off to a brilliant start for me. After having major surgery last November for a ruptured cruciate ligament, my recovery had been somewhat hampered by a pesky infection. A long course of antibiotics is now underway and time will tell if they’ve managed to zap the bacteria completely. Paws crossed that is the case so I can avoid further surgery to have the metal work removed.

So what better way to assist my recovery than a sneaky break in the wonderful Cotswolds.  My humans had booked a beautiful cottage in a village near Moreton-in-Marsh back in December but my unscheduled need for the Orthopaedic Specialist had put paid to that holiday.  Fortunately the lovely people at Jigsaw Holidays  kindly agreed to us changing the dates at short notice, so come Friday 2nd February I was hot footing it down the M6 heading for this most beautiful part of England.

And so we arrived …

Our home for the week was the wonderfully homely Slatters Cottage situated on a quiet street in the quintessential village of Bourton-on-the-Hill in the heart of the Cotswolds.  We were greeted by the cutest of cottages with a log burning stove housed in a huge inglenook fireplace and also the biggest chocolate cake we’ve ever seen! (none for me of course as chocolate is very bad for us pooches!). 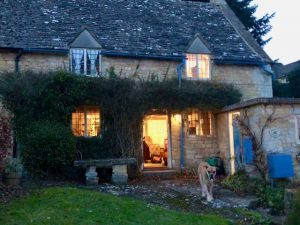 I had a quick deeks (my Cumbrian dialect is coming on a treat) around my new pad but before I had chance to say ‘Where’s me Kong’ we were off out again!

We headed up to the local pub, the Horse and Groom, which was a stone’s throw away. Super dog friendly people looked after us superbly.  Mother and Father enjoyed a delightful dinner whilst I enjoyed a chill on the floor.  I managed to charm the lovely Polish barmaid who was certainly not stingy with the dog treats, I can tell you that.  During all of this a huge flat screen TV was brought in to the pub.  We were informed that it was to enable them to show the rugby internationals over the weekend – so that was us sorted for the next two days!

Come Monday after our rugby overdose we were all ready to venture further afield and sample afternoon teas over real ale! (They sold Snuffle Dog Beer in the pub).  A delightful potter around the market town of Stow-on-the-Wold never disappoints.  My folks were particularly pleased with a visit to the Cotswold Cheese Company where they stocked up on excellent local cheeses and a bottle of the locally produced Cotswolds Gin which certainly put a smile on mother’s face.  The day was rounded off with a bit of food shopping at the Co-op in Bourton on the Water.  We have to say this Co-op was the supermarket to beat all supermarkets, it was fab-u-lous (as Craig Revel Horwood would say!). 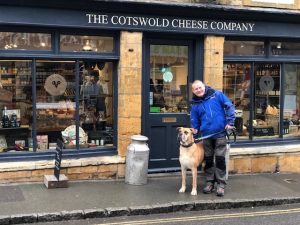 Due to my operation my walks are limited to 40 minutes, three times a day. This curtailed our usual trekking over fields and through woodland from one village to the next.  Our exploring on this holiday became more town and village based and a few trips down memory lane. This had Mother and Father driving round endless villages trying to locate cottages that they had stayed in previously with my predecessors Gus and Suggs.  At one point Mother had us down some random country lane in an effort to find Jeremy Clarkson’s house that he blew up just over a year ago but we failed to locate the pile of rubble!

The weather was generally quite kind and on a glorious Tuesday with deep blue skies we wandered through fields around the outskirts of Burford.  As we came back into the village it was decided it was too late for lunch and an afternoon cream tea was in order. 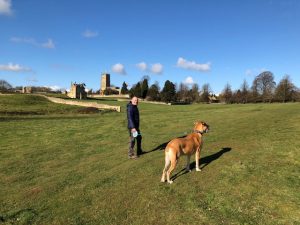 As we walked up and down the street looking in various eating establishments we were spoilt for choice for characterful bars/cafes and hotels most with roaring fires and comfy leather chairs.

We settled for a seat in front of the huge open fire at the Bay Tree Hotel.  A party nearby celebrating a birthday were quite taken with me and I seemed to particularly prove a hit with the birthday girl herself.  As you can imagine I soaked up the attention. The barman was another soft touch too and I managed to scrounge a full FOUR Smacko treats off him.  A couple of hours were whiled away as we watched through the window the gardener trimming the huge wall creeper on the outside wall. Perhaps the only drawback of a winter visit is you miss all the wonderful greenery and flowers that adorn these beautiful old buildings in the Cotswolds in the summertime.

Back at base it was another night in front of the fire. My folks had forgotten to bring scales or measuring pot for my food and after a bit of trapesing about today they’d managed to find some economical kitchen scales. This was much to my disgust as it transpired that Father had been guestimating my food quantities completely wrong and as a result my dinner portions were slashed! The cheek of it, especially when you see what they’d been stuffing down their necks with creams teas etc! 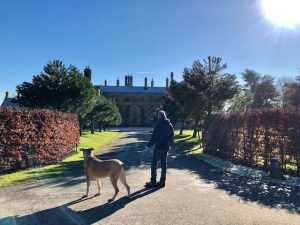 Batsford Arboretum – what a find …

Wednesday saw us visit Batsford Arboretum and Garden Centre in the parish of Blockley.  We’d dropped by earlier in the week and decided it was worthy of a day’s visit.  The café was bustling even on a mid-week day.  We started with a 50 minute walk around the arboretum (whoops, that’s 10 minutes over my allowance so slapped wrists all round there).  The grounds were fascinating and the trees were magnificent.  The walk took us past the privately owned Batsford House, which had a very Downton Abbey look about it, and then onto the picturesque St Mary’s Church of Batsford.

At the end of the walk we came across a giant decorated hare which had been part of the Cotswold Hare Trail, similar to the Go Herdwick trail that Podgy Paws were proud to support back in 2016.

We then had lunch in the Terrace Café and as the sun shone through the window it became so warm you would have been excused to thinking it was the middle of summer and not a cold February day with the threat of snow looming.  Our visit was finished off with a quick scoot around the garden centre.  Mother was particularly impressed with the merchandising of the plants (once a retailer, always a retailer!) and took away some ideas with her but alas not a plant as Father said there wasn’t enough room in the car on the journey home.

The final day began with a walk around one of the 147 lakes which make up the Cotswold Water Park, situated south of Cirencester. The area is 40 square miles of a mix of nature reserves, recreational activities and holiday accommodation.  The particular lake we walked around (No 32 if I remember correctly) had a sandy beach for adults and a separate section for dog swimming, but it was too cold for me to dip my paws despite being very tempted.

As we headed back towards our cottage we did a small detour via Bibury.  The village is famous for the row of houses, known as Arlington Row, which is depicted on the inside cover of all United Kingdom passports. However, you may recall the cottages from when they featured in the national press in 2017.  This was after it had been reported that an “ugly” yellow car parked by an elderly resident had been vandalised, possibly by someone connected to tourism as visitors had repeatedly complained that it spoiled photographs of the iconic scene.  It looks like the chap has replaced his car with a grey one now, but we were delighted to see he’d kept to his roots and had a bright yellow steering wheel cover and matching wheel trims!

We finished off our visit with a quick pint in the delightful Swan Hotel (cue more treats, water and fussing from staff) before heading back to our cottage for my last night huddled in front of the fire dreaming of my wonderful week in the fab-u-lous Cotswolds. 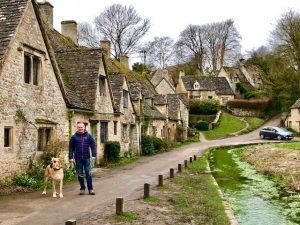