Keswick Scruffs – the Dog Show not to be missed!

Podgy Paws are the proud sponsor of Scruffs – Keswick’s answer to another dog show of a similar name.

But this dog show isn’t for the Best in Breed, it’s for the best at something else, something that makes our dogs so loveable and unique – even if it is a bit quirky!

Once a year in June, dogs bring their human friends to Fitz Park in Keswick to battle it out for titles like “The most appealing eyebrows” or the “Scruffiest dog” and “Best Biscuit Catcher”.  For those that catch the judges eye, but for all the wrong reasons, there is the coveted “I didn’t win, but at least I was noticed” wooden bone award.

The event is organised by Keswick Town Council as part of its celebration of all things dog and being the most dog friendly town in the UK. Councillor Tony Lywood explains how it all began: “Scruffs was the brainchild of Simon Meyers, a BBC producer who lives in Keswick and it was conceived over a pint in the Square Orange. This was on the back of the town’s obvious propensity of dogs and dog lovers. Peter and Chris, who own Podgy Paws, were in at the beginning of the process along with Keith Graham’s Lakes Partnership who sponsored the event with Podgy Paws. Together we crafted a fun dog show that imitated Crufts but instead of the best King Charles Spaniel we had the ‘dog with the waggiest tail’ and ‘the dog that looks most like it’s owner’.  It has now been running for three years and gets better every year.”

Tony remembers it got off to a “woof” start: “The first Scruffs was steeped in national controversy over the withdrawing of the ‘frisbee throwing contest’ for dog health and safety concerns. This was picked up by the Daily Mail and eventually was on the front page of the Telegraph. Subsequently BBC TV did a piece for the regional channel on it.

“Throughout these last three years Podgy Paws has fully backed and promoted, both financially and with great enthusiasm, the annual Scruffs dog show. Every year in June we have in excess of 500 dogs and owners plus an equal number of those enjoying the day. At the end of the day the stewards clean up and scour the arena for poo and, as of yet, we have found nothing! Chris and Pete Harper could not be more supportive of this community and town based event.”

Pete Harper said: “We loved this idea from the start. We get to see lots of great dogs and their owners having fun in the park. For us, the fact Scruffs celebrates every dog makes it a winner. It’s a real celebration of all dogs – whether they are a happy accident mixed breed or a pedigree. We are very grateful to Ezydog who have generously supported the event each year.  The categories change every year to keep giving old dogs new tricks to play with. Anyone with any good ideas for a new category should get in touch!”

The next Keswick Scruffs is at Fitz Park, Keswick on Sunday 25th June 2017. More information can be found on the Keswick Scruffs facebook page. https://www.facebook.com/KeswickScruffs/ 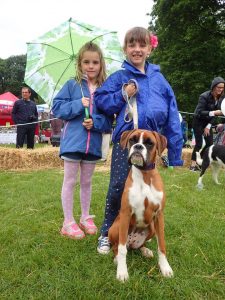 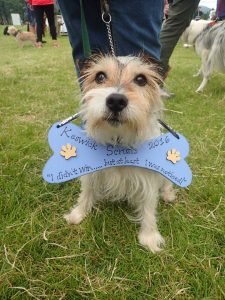