There’s a pack of four-legged warriors who roam the mountains to search for people who have lost their way.

Sometimes the people are walkers who have got into difficulty. Other times it is people who don’t want to be found.

It doesn’t matter who it is or how the people find themselves in trouble, the Lake District Search and Mountain Rescue Dog Association (LDMRSA) members are always on call to help.

One of the counties most experienced dog handlers is Mick Guy, he has spent 27 years with Lakes Search Dogs and has had three dogs alongside him – the first was Spin (short for Spindrift), then there was Mist and finally Ginny, who has just retired at the age of 12.

To give you an idea of how active these dogs are, Ginny has accompanied Mick on 258 call outs and carried out 178 searches. She is his constant companion on call outs for Keswick Mountain Rescue Team. Even though she is retired, Ginny still gets up ready to go when Mick’s pager goes off. She is still fit enough to go out, but her own sight is failing and she has developed selective deafness in her old age!

“It’s complicated to train a search dog,” Mick begins, “It gets progressively more complicated. The first stage seems easy, but then we go into bigger environments and more complex landscapes where the wind direction changes things. What we humans can see, hear, feel, smell and touch at head height is totally different to the dog’s experience at knee height.

“Essentially the dog is looking to pick up the scent from the body that is lost. The scent gets blown about by the wind and carries in a cone shape across the fells, our dogs need to pick up on that and follow it to the point where the person is. But there is constant air turbulence and it throws the scent all over the place. It is difficult for the dogs. Their abilities are far in excess of what we understand.

“For the search dog, they think that they are looking for the squeaky toy that all lost people carry in their pocket – of course the people don’t carry a toy, I do, but that’s what motivates them to go on a search. As a handler you need to know what your dog loves playing with and turn the searches into a big game.

“For instance, to motivate a border collie or a collie terrier cross, you need a game, if you were motivating a labrador, you’d use food.”

The dogs and their handlers are totally committed to their craft. Every Tuesday the Keswick Search Dogs go out to train, whatever the weather. Mick says it is incredible how lonely and exposed you feel when you are sitting on a mountain waiting to be rescued – a scenario someone has to volunteer for each week.

“We’re like a one-man rescue team. We have to carry all the gear to keep ourselves safe and the casualty alive, we need to carry communications equipment. It costs £2,500 to equip each handler and dog and both carry an avalanche device during the winter.

“That’s why fundraising support from Podgy Paws is so important. They have been absolutely brilliant.”

There’s currently 17 working dogs in the Lake District. Keswick is a bit of a hotspot with four of the LDMRSDA dogs living around town and it is where the training centre is.

So what motivates people like Mick to give up his free time not only to volunteer when he is training his dog but also the many hours spent on the fells searching for people in often terrible conditions?

“In all the years I have been a Search Dog Handler, one find near Shap really made an impression on me. We had a call out to search for a man in his mid thirties, he had young children, he didn’t think he could take living any more and he was missing.

“My dog Mist found his jacket within seven minutes of us starting the search. We found him 30 seconds later. He had taken tablets, cut his wrists and drank a lot of Scotch. He’d written letters to his wife, children, parents – everything was covered in blood. BUT, he had changed his mind and tried to crawl back to his car. I am glad to say he went on to make a full recovery.

“For me, that was a defining moment. It made a huge impression on me. I look back and think I don’t resent a minute of the time I spent training. It was a textbook find. The dog went off, then came back and indicated to me to follow before going off again. I followed and we found him.

“With my dogs, I have had 13 ‘finds’ or ‘locates’ – where we have a rough idea where people are –  that’s 13 people who feared for their lives alone on the mountains, who were lost and desperate for help, who we rescued. Only once did we find a body after a suicide.

“LDMRSDA relies upon generous charitable donations to train the dogs and to keep us going. Any support is always greatly appreciated.”

To find out more about the work of the Lakes Search Dogs, visit: www.lakes-searchdogs.org 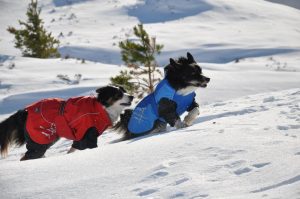 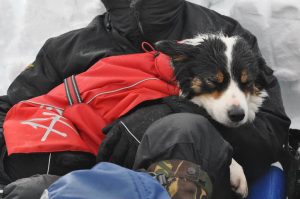 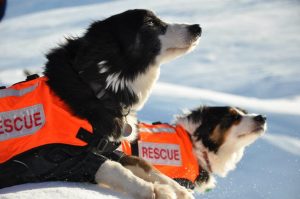